Robin Doerschuk is an entrepreneur and a growth-oriented business professional.  Robin started her career with Alliance Solutions Group, then a small firm of 6 employees, a full-service staffing and recruitment agency, immediately following college graduation in 2004. In 2011 she became a shareholder as the leadership bought out the original investor.  She still maintains her equity in the organization today.  The company is now one of the largest staffing firms in the United States.

Robin is currently the Vice President and GM of Snip Internet a fiber internet service provider.  Robin joined Snip Internet in October of 2018.  Robin’s focus is on growth and expansion.  Since her start the organization has grown from 1 market to 3 in the last year.  Also, with in her first year the organization successfully completed and secured their first raise of 7.75 million and will be expanding into Milwaukee and Columbus in 2020.  Snip internet also acquired Rocket Fiber Residential Services out of Detroit, Michigan in July of 2020.  Robin is excited to join another Cleveland startup which is positioned for fast track for growth locally and nationally.

As Robin continues advancing within the company, she strives to give back to the community by influencing change within several organizations.

Most recently, Robin recognized a need for continuing education for women in business, so she created and founded the Women’s Leadership Conference of Northeast Ohio. 2015 was the inaugural year and hosted 350+ attendees.  The event was a huge success hosting 12 powerful female speakers. She and her team hosted the 5th annual conference that sold out with 740 attendee’s in September of 2019.

Loyal to her cheerleading background and her Alma Mater, Robin also created the Kent State Cheerleading Alumni Group, which now has more than 250 active members.

Robin has been recognized for her leadership and outreach in the community:  Most recent in 2020 Robin was recognized as one of the top Smart 50 Business Leaders in NEO.  In 2009 Robin was recognized by Inside Magazine as “One to Watch” in 2014, Robin was the recipient of the Distinguished Marketing and Sales Awards from SME Cleveland, and in 2015, she received the Women Who Excel Award from Smart Business Network, in 2017 she was awarded Women of Achievement Award by the Women’s Network of Ohio, 2018 she was recognized by YWCA Cleveland and most recently she was recognized by WELD Cleveland as women WELDing the way calendar.   She is passionate about her work, and about helping those around her succeed. She is most proud of her family husband Jeff and two children Maximus and Troy. 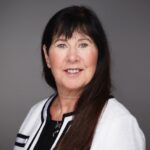