We developed a four week digital campaign leading up to National Decision Day, when seniors choose which college to attend — researching the 40 top-performing STEM high schools in the four closest states. Half of the campaign went toward mobile in-app ads, geo-targeted to those schools. Any student who engaged with an ad and then left the area were retargeted later using the other half of the budget. In total, the university spent less than $3,000 to deliver 250,000 ad impressions over four weeks. By National Decision Day, the results were in. 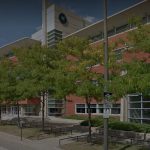